Linked to dementia, depression and high blood pressure, chronic loneliness threatens the health of one in 10 older people.

With numbers set to surge 50 per cent to 1.5 million by 2028, AgeUK and the Campaign to End Loneliness say health professionals and local authorities must take urgent action. 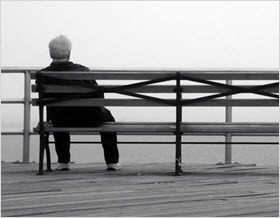 “As the numbers of old people  in our society increases, the problem is set to get worse unless we do more to help older people to avoid and overcome it.

“Mounting evidence shows loneliness has a serious impact on our mental and physical health – which in turn can lead to greater reliance on health and social care services –  making it an issue we can ill afford to ignore.”

Titled “Promising approaches to reducing loneliness and isolation in later life”, the report details the impact of chronic loneliness – feeling lonely all or most of the time – can have on the health of older people.

The research uncovered that one in four (2.9 million) Britons aged 65 and over feel they have no one to go to for help and support. As well as serious implications for mental health, it found that chronic loneliness can be as harmful as smoking 15 cigarettes a day, increasing the risk of dementia, high blood pressure and depression.

The report claims that health service funders and commissioners are suffering from a “knowledge gap” as they struggle to meet the challenge of chronic loneliness.

Highlighting figures showing that in 2014 around five million 65-year-olds had never used the internet, the study found that older people have difficulty accessing public transport services due to local transport cuts and high taxi prices.

The report suggests a framework of solutions aimed at improving access to technology and transport. And after finding that having friends and family nearby is important to older people than to younger generations, the report sets out strategies aimed at helping the elderly to be better socially connected.

Laura Alcock-Ferguson, director of the Campaign to End Loneliness, said: “Although facing tough budget choices local authorities want to know what can be done to tackle loneliness.

“We are offering this framework to those 51 per cent [of councils] who have promised to tackle the issue in their health and wellbeing board strategies.

With this they can put into place a comprehensive network of community to prevent and alleviate isolation and loneliness.

“Wouldn’t it be wonderful if this “framework of solutions” could be implemented to start a turnaround. The situation at present with reduced funding to county councils and probably more to come, more broken promises from the next administration (whichever) and a situation getting worse with time passing, it’s highly likely not to.”

People are ignoring cancer warning signs because they worry about wasting their doctor’s time, a study found.

Others avoid getting checked out because they fear a cancer diagnosis.

The “alarming” findings also suggest too many Britons adopt a stiff upper lip, lack confidence in the healthcare system, or think their problem is down to ageing.

Other believe their symptoms will simply go away if left alone, the Cancer Research UK study found.

Dr Katriina Whitaker, a research fellow at University College London, said: “Many of the people we interviewed had red flag symptoms but felt these were trivial and didn’t need medical attention, particularly if they were painless or intermittent.

“Others felt they shouldn’t make a fuss or waste valuable NHS resources. The stiff-upper-lip stoicism of some who decided not to go to their doctor was alarming because they put up with often debilitating symptoms.”

More than 1,700 people aged 50 and over were sent a health survey featuring symptoms typical of cancer – such as a persistent cough or change in bowel habits – and asked to decide whether or not they would seek medical help. The survey specifically did not mention cancer, but incorporated a list of 17 typical symptoms.

More than half of those surveyed reported as having at least one symptom in the past three months. But further interviews suggested almost half of them had not consulted their GP about their symptoms.

One woman with persistent abdominal pain did not go for a recommended test. She said: “At times I thought it was bad, but when it kind of fades away, you know, it doesn’t seem worth pursuing really.”

Dr Richard Roope, of Cancer Research UK, said: “The advice we give is: If in doubt, check it out – this would not be wasting your GPs time.

“Often your symptoms won’t be caused by cancer, but if they are, the quicker the diagnosis, the better the  outcome.

“Seeking prompt advice from your GP about symptoms, either on the phone or during an appointment, could be a life-saver, whatever your age.”

The findings are published in the British journal of General Practice.